A Ural motorcycle is a heavy motorcycle with a sidecar produced by the Irbit Motorcycle Factory, russia. Its production originates from 1940 when the soviet union stole the design of the R71 BMW motorcycle – one of the best military motorcycles of that time, which had been used in the German army since 1938.

The first M-72 motorcycle was manufactured in the USSR in 1941. At the beginning, these motorcycles where produced by factories located in Kharkiv, Moscow, and Leningrad (now Saint Petersburg). Later, the production facilities were moved further to the East to Gorkiy (now Nizhniy Novgorod) and Irbit located in the Ural mountains, at the edge of Siberia.

Normally, M-72 motorcycles were equipped with sidecars, however, a certain number of bikes without them were produced as well. M-72 with sidecars were quite popular due to the non-differential sidecar wheel drive, which was quite efficient for the soviet impassable roads.

The first motorcycles were equipped with a four-stroke horizontally opposed double-cylinder engine producing up to 28 hp (20,6 kW) and a 4-speed gearbox. At that time, these technical characteristics were considered quite high, which was the reason why the Soviet Defense Ministry found these motorcycles suitable for military use.

As the motorcycle production got militarized, the Irbit Motorcycle Works (IMZ) had been continuously expanding since 1942. As a result, the production increased from almost 10.000 pcs during the World War II period to more than 30.000 pcs in the next decade. Later on, in 1953, the factory begins to export Urals to developing countries and the USSR allies.

A similar motorcycle called Dnepr MT was produced by the Kyiv Motorcycle Factory (KMZ). There are several differences between Dnepr MT and Ural motorcycles, still they have lots in common because of sharing the same origin (see the origin of cossack motorcycles). Both Dnepr and Ural bikes are known by the name “Cossack motorcycles”, generally applied to all internationally-sold Soviet motorcycles in the 1970s that had been marketed abroad by SATRA (the international New-York-based Corporation known for importing, modifying, and distributing the soviet cars and motorcycles abroad).

The following are the road motorcycles – the most popular category of IMZ motorcycles:

The next are Ural motorcycles designed for road racing and cross competitions:

The modern-day products by the IMZ are mainly heavy sidecar motorcycles made to withstand the tough russian roads. The contemporary Urals are equipped with modern engines featuring a fuel injection system specially designed by the American manufacturer “ElectroJet”. 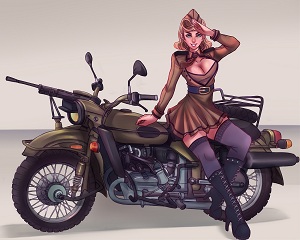 a Ural motorcycle in modern art

At the moment, only 3% of Ural motorcycles are sold in russia and other ex-soviet countries. They are mainly exported to the USA, Canada, and Australia. Comparatively smaller numbers are also sold in Europe (the UK, France, Netherlands, Spain, Belgium, Iceland, Germany, and Sweden), Africa (Egypt, South Africa), Middle East (Iran), and Southern America (Paraguay, Uruguay, and Brazil). The markets of countries like Japan and Korea are quite promising since the demand for this sort of vehicles with sidecars is quite high at a comparatively low competition.

Due to the decrease in demand for Ural motorcycles in the early 1990s, the company has switched from the complete production cycle to the original equipment manufacturer mode (OEM) which means it rather sells its brand or resells the customized product than manufactures equipment itself. In recent years, a certain amount of engineering improvements has been introduced in order to improve the motorcycles’ durability and make them more attractive for the customers.

Although the design, as well as many technical solutions of Ural motorcycles, is quite old, these bikes are now successfully marketed as reliable modern vehicles with a pure ‘masculine’ nature. The following innovations and upgrades are great evidence to such a statement:

Some Facts about Ural Motorcycles