Dnipro MT (also pronounced as “Dnepr” and “Dnieper”) is a brand name of a heavy road motorcycle with a sidecar that was manufactured by the Kyiv Motorcycle Factory (KMZ). The latter was founded in the end of 1945 and was established on the basis of the military production lines of the Kyiv Panzer Factory. The first motorcycle that was produced by the factory was the “K-1B-Kyivlianin” that was a full copy of the German Wanderer 1Sp received by the USSR as reparation after the World War II. It was a very simple motorcycle which had only 2hp, two-speed gearbox, bicycle pedals, and no rear suspension. Later the KMZ started the production of Dnipro motorcycles

The modifications of the Dnepr motorcycle had been equipped with the sidecar wheel drive and starting from the MT-9 model they also had an automatic clutch mechanism and electronic ignition system. In the beginning of the 90-s, the KMZ started producing models with spring-type lever forks in front that were similar to those used in Ural-Tourist models by the Irbit Motorcycle Factory.

The History of a Dnepr Motorcycle

Similarly to the famous “Ural”, the Dnipro motorcycle originated from the well-known German BMW R-71 and its Soviet copy M-72 and had evolved through several early models (K-650 and K-750) that were equipped with the overhead valve engines. In the early 1970-s, the “K” index was changed to “MT” so the model K-650 got renamed into MT-8.

In 1971, the Kyiv Motorcycle Factory introduced the MT-9 model with several major technical improvements such as MT 804 gearbox with rear drive and automatic clutch-switch-off, direction indicators, and lamps with enhanced light-reflecting efficiency. Soon, this model was additionally equipped with a newer fuel tank which was later successfully used in many MT models, as well as with the double-pinned ignition coil B-201(6v) and the newly-designed circuit breaker (PM-11). 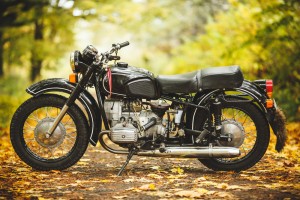 a restored Dnipro MT10-36 in Latvia

In 1974, the new model MT-10 had been the first Dnepr motorcycle to feature the 12-volt grid for its electric equipment. It had also introduced an enlarged fuel tank and a new ignition coil B-204 which was able to provide sparkle for two ignition plugs. Its modification (MT-10-36) that was introduced in 1976 had an increased compression and a new type of carburetors. As the result, its engine power grew up to 36 hp.

One of the most successful Dnipro MT models ever produced by the KMZ was MT-11. It featured an impressive load capacity of 260 kilograms, however, practically all Dnepr models were usually exposed to much heavier loads, especially in the village areas where they often served as a compact freight transport.  The maximum speed in this model could reach a bit more than 65 miles per hour (105 km/h). The first bike was produced in 1985 and featured the 32-horse power four-stroke engine and a four-speed gearbox with the rear drive. Additionally, the model was equipped with a parking brake and the drum brakes on all wheels including the sidecar wheel. The suspension consisted of the telescopic fork in the front and a pendulum chassis type in the back.

Another model that had been quite popular for years is the MT-16 that had been produced by the Kyiv Motorcycle Factory since 1986. Although this model was slower than MT-11 (the maximum speed decreased by 10 km/h or 6.2 mph and made up only 95 km/h which was almost 60 mph), its double wheel drive (a drive on the sidecar’s wheel) had significantly improved its off-road characteristics which were quite useful for the Soviet roads with their potholes capable of destroying any machinery.

For decades, the Dnepr MT had been a real motorcycle mass production in the USSR. The factory had manufactured over three million vehicles since 1967. They were mostly designed for the internal needs of the country including the models for civilians, military, and public utility services; however, some models had been successfully exported outside the USSR as well.

The history of non-serial Dnipro motorcycles dates back to 1956 when the first escort vehicles had been produced by the KMZ to accompany state delegations and the USSR top officials. They had specific requirements such as an increased engine power, high cruising speed, fast speed gain, durability, and endurance.