Hi folks! Bad weather outside helped me find some time to write a new post today 🙂 I hope my day won’t be totally wasted and you’ll like the post. Do you remember how Ural motorcycles look like? Well, today I’ll show you how a Ural cruiser looks like. Please meet the Bomber, a custom cruiser built from a Ural motorcycle.

The idea to write about some cruiser I got from one fellow I talked with about retro motorbikes last week – Ryan Yamashita. He works at BikeBandit.com, a website selling lots of motorcycle related stuff from motocross parts to cruiser parts and accessories. Actually our conversation started with “hey there, I sell parts for cruisers and I consider myself to be pretty experienced in this, but guest what, I found a photo of a cruiser I can’t identify. I really hope you can help me find at least some info about what motorbike it is.” I identified the brand at once, but I got interested in the project and dug a little deeper to find details about the bike. 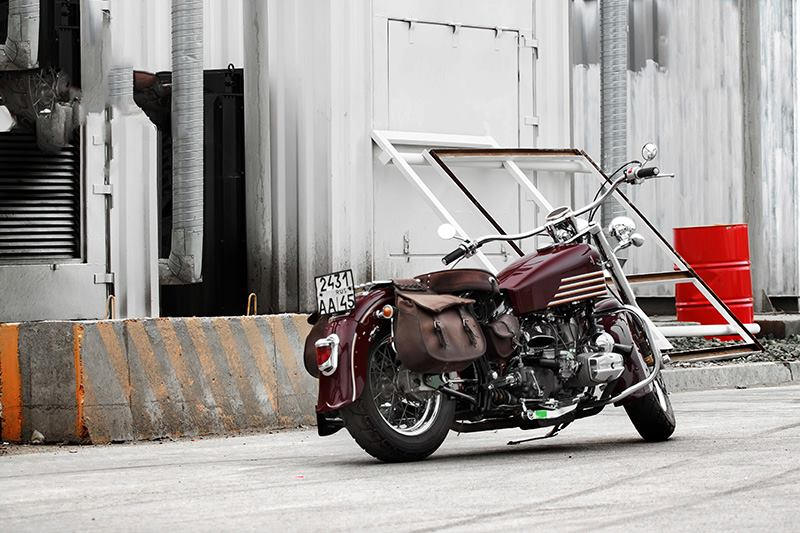 It turned out that the bike is named the Bomber and it was created in 2000’s somewhere in russia. The creator of the bike was inspired by movies of 90s and wanted to build something similar for himself. And I should say he got what he wanted. Let’s discuss what has been done to his Ural to make it look like a classic cruiser.

As for the engine, I guess it’s safe to say that the engine is 100% standard, except, of course, the air filter case, which is definitely unique. Some of you might think “wait a minute, about what about the carbs? These are CV carbs by Keihin and not some K-XX model that are common to cossack motorcycles”. It’s not quite true. The thing is that newer Urals were equipped with CV carbs by Keihin, yet starting from 2014 all Urals are now equipped with the EFI system. Anyway, let’s move on with the rest of the Bomber.

A standard Ural front fork was replaced with the Paioli one. The lights were taken from who knows where, the same thing is with several other minor elements. Yet, most parts are custom ones and were created specifically for this project. I’m talking about the wheels, fenders, gas tank, seat and bags. These custom elements are the ones that make the Bomber Ural cruiser look like American cruisers of the middle of the XX century. That’s the exact reason I’m fond of custom stuff – this is what makes every project truly unique.

I hope the Bomber amazed you as much as it amazed me and you will be back to see more interesting custom project.

If that’s the first custom motorbike you see on my blog, be sure to check other custom cossack motorcycles I’ve written so far.