The Acheron – A Custom Chopper made from a Ural Motorcycle

Hi all! I have another interesting custom project that is worth your attention. This time the post is about a nicely built chopper that used to be an ordinary Ural motorcycle.

If you pay attention to the frame and the seat, you’ll see that this bike is not really meant for long rides, in fact, I’d say it’s not meant for riding at all. Just imagine riding a hard-tailed bike with a flat seat (it has no springs to absorb shock impulses).

Apart from this, there is one more thing that makes the Acheron to be rather a show bike and not the bike for everyday riding. I’m talking about the braking system. The bike has only the rear brake and this might not be enough in some cases, especially for a rather heavy chopper. 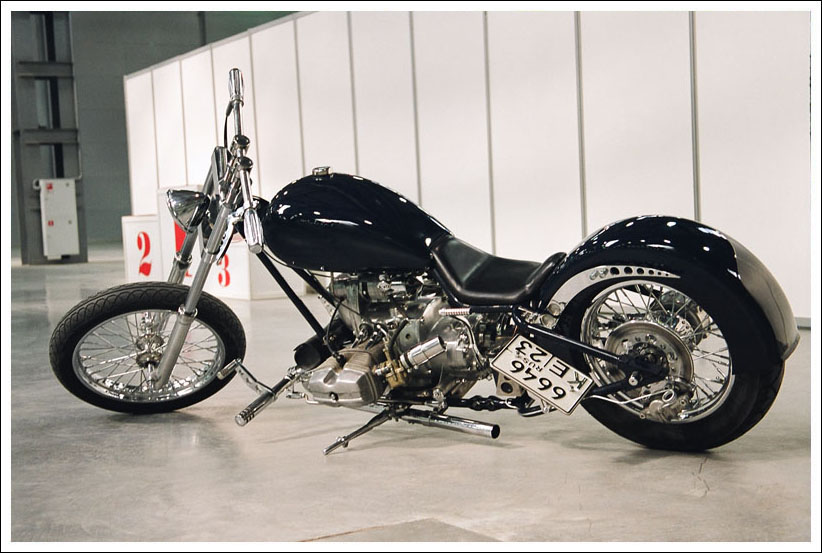 The last disadvantage I see in this bike is the engine. My personal choice between Dnipro and Ural engines is a Dnipro one, it’s better built and has more potential for being upgraded. The good news is that the gearbox of the Acheron is from a Dnipro MT, and repairing a Dnipro gearbox is much easier than fixing a Ural one and it can be upgraded with the 5th gear, which is a must for solo projects (i.e. without a sidecar) like this chopper.

That’s it, I’m done with the negative sides and can start talking about the benefits of the Acheron. This custom Ural chopper has a classic style: a long base, lots of shiny elements and a convenient position of the foot pegs. Speaking of the shiny parts, just take a look how well-built the foot pegs and levers are. The handlebar, grips and clutch lever are nice and shiny as well and were custom-built for this bike. You can probably say “ha, what is so special about this metal rod?”. Indeed, creating such a handlebar is no rocket science, but you can’t argue the fact that it fits the design of this custom chopper ideally.

As for other parts of the bike, the gas tank is from a K-750 motorcycle, the front fork is from an Izh Orion, the lights were custom-built for this project. To tell the truth, the only thing that is left from a Ural here is the engine. We can say that the bike was built from scratch and it’s really great that all its elements fit each other so nicely.

All in all, it’s a great looking chopper no one would like to ride everyday 🙂 My personal opinion is that the best use for the Acheron is to place it in some bikers café to attract attention of the audience. Don’t you think so?