A Piece of History: the Origin of Cossack Motorcycles

Ok fellas, the topic I’m about to cover this time is a generic one and I hope it will be useful to those of you, who have little or no knowledge about Cossack motorcycles. I’m gonna answer the most common questions people have about these bikes.

What Does the Term “Cossack Motorcycles” Mean?

Back then, during soviet times, there was a special company that dealt with all motorcycles produced in the soviet union, and all those bikes were branded as Cossack Motorcycles. So, generally speaking, the term “cossack motorcycles” includes all bikes produced in the former soviet union. Even though the term also includes such bikes as Izh (the one on the featured image), Minks, etc, the most popular ones are Dnipro MT and Ural, so, when you hear someone saying this term, you can be sure this person means Dnipro or Ural.

As for the idea to name the bikes “Cossack”, well, everything is simple. A few centuries ago when we had slavery and Ukraine was occupied by poland and russia, those men who valued their freedom above all and were ready to fight and die for independence were called the Cossacks. This was an extremely powerful military formation that was able to successfully fight the forces of russia, poland and osman empire. Thanks to their love for freedom, fearless and excellent horse-riding skills Cossacks became an ideal brand name to represent soviet motorcycles.

How Were Those Bikes Created?

Both Dnepr and Ural have the same origin – BMW, nope, it’s not a joke. I know, it’s hard to believe that these bikes with all their engineering problems have something to do this the world-famous BMW company, but they really do. 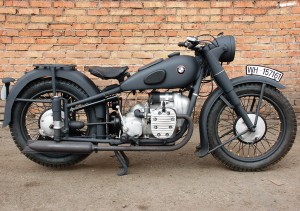 an example of a BMW R71 motorcycle

In 1940 the soviet union decided to equip its army with military motorcycles. They were lazy enough to design something and thus decided to simply copy BMW R71, which had already proven itself to be a high class military motorcycle in the German army. So, soviet anonymously bought 5 BMW R71 somewhere in Sweden, got them disassembled, copied and created the M-72 motorcycle. Unfortunately, as it always happens, the copy was far not as high quality as the original bike and had a number of problems that merged to later versions of soviet heavy motorcycles (K-750 by KMZ, M-61 by IMZ). Later K-750 was replaced with the K-650 model that was named the Dnipro MT-8, and M-61 was replaced with the Ural M-62 motorcycle.

What Are the Latest Models of Dnepr and Ural Motorcycles? 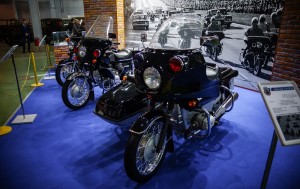 an example of a Dnipro Escort 14.9M

The latest model of a Dnepr MT is the Dnipro KMZ 8.157.01, it’s a solo (without a sidecar) heavy motorcycle that became available for buyers in 1991. This model is a rather downgraded version of the Dnepr Escort 14.9 model that was made solely for escorting big bosses in kremlin. I will make a separate post about the Dnepr Escort 14.9 in the future, because it deserves much more than a few lines in a general post. As you can see, even the latest model from KMZ is a rather outdated product that needs thorough upgrade before it becomes really efficient and reliable. 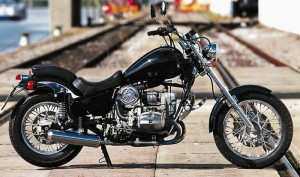 an example of a Ural Wolf

When speaking about the latest products of IMZ, the situation is slightly better. Most models are as old as the ones from KMZ, but there are several rather modern models like Ural Wolf (btw, this model is no longer produced) and Ural Retro. Indeed, the mentioned models are much better than the previous ones thanks to using lots of European, American and Japanese parts (brakes, ignition, carburetors, etc.), but, unfortunately, that doesn’t mean that the models are really high quality. They still have some engineering issues connected to the engine itself, so these bikes need some manual improvements even despite being rather pricy.

Hope this post gave you better understanding of what cossack motorcycles are, how they were created and why they are not as reliable as we would like them to be. If you need some additional information or have some specific questions, please feel free to ask them in the comments below. I’ll do my best to answer them asap.

Yes, You Can Make a Motorcycle Ride Safe: Here’s How

Finding the Right Type of Shoe for Your Iron Horse