Hi folks! I’ve noticed that lots of people simply can’t tell the difference between Dnepr MT and Ural motorcycles. So, this post should help you figure out how to distinguish those bikes once and for all.

Why Do Those Motorcycles Have So Much in Common?

Personally I can name two main reasons for this. As I’ve already mentioned in the post about the history of cossack motorcycles, both Dnepr MT and Ural motorcycles share the same predecessor – BMW R71. This is the reason #1. Additionally, both motorcycles were built in the soviet union. And everything in that gods-forgotten country that luckily became history – cars, houses, clothes, lives – was almost identical. Heavy motorcycles with sidecars were no exception, so this is the reason #2.

How to Tell Dnipro MT (KMZ) from Ural (IMZ) at a Glance?

The easiest way is to take a look at the engine. If valve covers look more like rectangles, you’re looking at Dnepr MT (at least the engine is from Dnepr MT). And if valve covers are rounded, this engine (and probable the bike itself) is from Ural. Please see the picture to find the difference in valve covers. 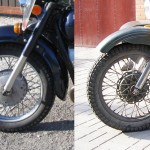 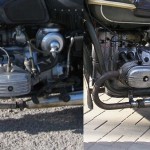 You can also check the wheels to identify a bike. Both Dnepr and Ural motorcycles (except some latest Ural models) have drum brakes, yet the design of the hubs differs. The sides of Dnepr hubs are identical, while Ural hubs have space for drum brakes only on the right side. It should be mentioned that Dnepr hubs are more efficient in cooling down the brakes due to their shape. My English is probably too horrible for you to understand what I’m trying to say, so check the image to see the difference. 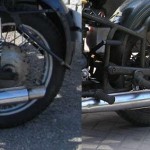 While both engine and wheels can be replaced, there is one difference that can’t be overcome so easily. I’m talking about the rear part of the frame, about the rear swingarm if to be precise. That’s exactly what the rear wheel is attached to. Dnepr has the swingarm bar “inside” the frame, while Ural has this bar installed on the outter sides of the frame. Check the picture to get what I’m saying.

What Other Differences Do These Bikes Have?

Most differences are connected with the engines. Dnepr crankshafts are solid, while Ural crankshafts are composite (yet, they can’t be dismantled). Oil systems are also different. The one that Dnepr has is more efficient. One of the things that usually mentioned is that Ural has an oil filter and Dnepr doesn’t. Personally I don’t see any problem here because Dnepr has a special centrifuge to clean the oil and from my experience this thing is actually pretty efficient.

There are some other minor ones, like the shape of a gas tank, seats, differential, etc., but the ones I mentioned are the most important to my mind.

What Should I Buy: Dnepr MT or Ural?

My personal choice is Dnipro MT because of a more solid frame, much better gear box and more powerful engine, which btw has much more potential for upgrading. It might be harder to get high quality spare parts for Dnepr than for Ural, but it’s not actually a problem when you know where to search. You see, I’m fond of custom bikes and Dnepr is an ideal base for any custom project because it’s cheap, reliable, unique and has great potential for upgrading. Yet, that’s just my opinion. If you have an opposite opinion, please do share it with me and other readers via comments. Anyway, both bikes are worth being talked about.

As always, if I forgot to mention something or you need additional info, leave a comment or contact me directly.

P.S. If you find this info useful, please do me a favor, like/share/tweet it in your social networks.

Yes, You Can Make a Motorcycle Ride Safe: Here’s How

Finding the Right Type of Shoe for Your Iron Horse